Breathing Life Back in to the Fresh Air Pavilion 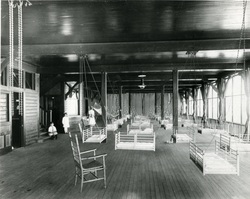 While working on a different project, a private collector handed me copies of the pictures you see above and asked if I had any ideas as to where the building was, or what it was used for. At the time there wasn't much spare time to pursue outside projects but I told her I would work on it as soon as I had a chance. As it turned out that chance came sooner than I thought. I spent time working with my project mentor trying to get any sort of lead on what the mysterious "baby hammocks" could have been used for.
My first stop was AGSL and the Sandborn maps. The building was not there. I scheduled a visit with the Archivist at Milwaukee Public library and to my surprise, when I got there, she had not only been able to turn up the original photos, but found an article in the Milwaukee Journal from 1974. After spending some time with microfilms I was able to uncover a few more articles that mentioned the pavilion. As it turns out, the Pavilion was used as part of the Milwaukee Infants Hospital for children suffering with tuberculosis.
Danielle Eyre
University of Wisconsin- Milwaukee
Encyclopedia of Milwaukee, Understories