The house at 2118 Kenilworth Place was designed by Fred Graf and built by Conrad Brothers Investment Properties in 1899. Along with this property the developers also constructed three identical buildings on neighboring lots (2102, 2108, 2112 Kenilworth Place). These buildings were built as single-family homes but some were converted into duplexes by the early 1940s. Compared to Villa Terrace and Ferneding House, 2118 Kenilworth Place is considerably smaller in size at 3455 square feet. By analyzing this house, we can examine how smaller buildings in this neighborhood also accommodated living spaces for servants.
Want to discover a first-hand account of this residence? Click on the button below and see Katherine Bowes' pictures from living at 2118 Kenilworth Place.
Community Feedback 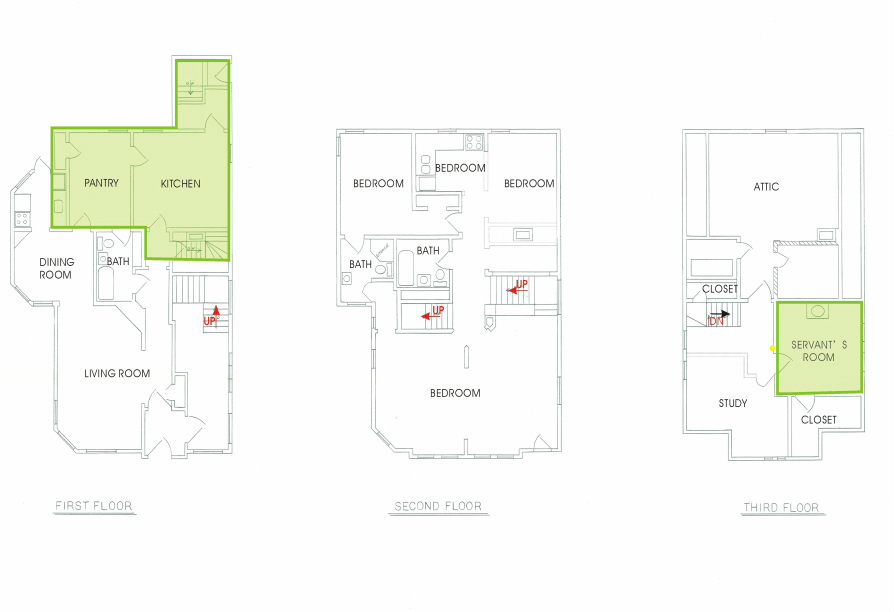 Layout and use
This house has three floors. The basement was used for storage. The service space on the first floor included a kitchen. As originally designed, the second floor had bedrooms or baths for the household. The attic housed a servant—a smaller bedroom with a sink served as a servant’s bedroom. Two windows located on the right side of this room looked down into the service alley so that the servants could observe this service passageway from their window.

This was a small house, requiring some ingenuity in separating the service spaces from the main house. By pushing the service spaces to the attic and basement, this house successfully separated these spaces from the main house. On the first floor, instead of entering the house from the front door, servants enter the house through the back door. Deliveries appeared at the back door. An original milk delivery box is still visible at the right side of the  kitchen. This delivery box can be accessed from the service alley. Servants went downstairs to the basement in order to store food and household items by using a staircase next to the back door adjacent to the kitchen. There used to be a window for this staircase and you can still see its outline outside the house. While much of this separation was achieved by carefully locating the service spaces next to the back entry, circulation and movement of servants within the house also had to be carefully choreographed.

Tempo
Despite efforts to separate, the world of the servants and that of the owners remained interconnected in these smaller buildings. In the middle of the second floor, there is a staircase that goes up to the attic, to the servant's bedroom. You can still see a lock on the doorway to this staircase separating the main house from the servants' living space in the attic.  One may easily imagine how the movement of the maid from her room in the attic into the living area might have been carefully regulated during social hours so as to not cross paths with invited guests.