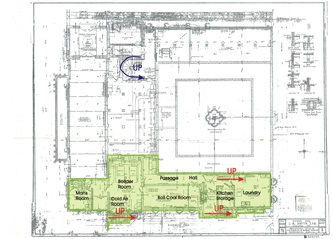 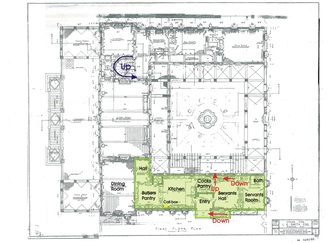 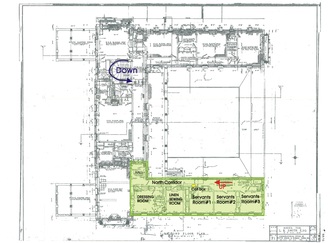 We chose three case studies in order to compare how the service spaces within these homes were organized.  Villa Terrace was constructed in 1924 for the Lloyd R. Smith family. The building is representative of a larger and wealthier household. The main house was separated from the service spaces. The latter was located in a separate wing. Unlike other homes studied in this field school the servant’s quarters at the Villa Terrace were designed in a more elaborate manner.

There were four female servants in this house in 1930. According to the US census records, forty years old Jean McCardy from Scotland spoke Scottish and 29 years old Hanna A. Lugser from Germany spoke German. Millie Hankey, the 45 years old cook from Wisconsin and Georgia B. Harding, a 34 years old nurse from Wisconsin also lived in these quarters. The 1940 census record shows that four female servants in this house. Forty-three years old Betty McMahon was a nursemaid who came from Scotland. Betty Eichmann was a 45 years old general maid who came from Wisconsin. Forty years old cook, Zovi Toni, was born in Austria. Lola Kiepe served as the second maid. She came from California and was 27 years old.

The Villa Terrace has two floors in addition to a basement. Service space in the basement included a man’s room, boiler room, cold air room, coal room, kitchen storage room, laundry room and a passage room. Service space on the first floor included a butler’s pantry, kitchen, cook’s pantry, servant’s hall and a servant’s bedroom. Servants’ space in the second floor included three servants’ bedroom with a call box near the bedroom, a linen sewing room and a dressing room.

The servants’ spaces at the Villa Terrace were laid out hierarchically. The servants’ main working area in the basement was poorly furnished compared to the main house and the butler’s pantry. All the floors and the ceilings in the basement were made of concrete. Windows did not provide much light. The walls were covered in glazed tile. The hierarchy between the servant rooms is evident from the architectural and spatial details. The butler’s pantry was closest to the kitchen and dining areas and this room commanded considerable importance. The pantry had a glazed tile floor. There was a double-sink with full counter and cabinets in the butler’s pantry. On both sides of the counter, there were two upper cabinets. In addition to this room, there was a servant’s bedroom located on the first floor. The decorations in this servant’s bedroom indicate that this room might have belonged to a head servant. The room had big windows that offered a good view to the yard. It was decorated with hardwood floors and had a closet. There was a bathroom connected to this room.

The first floor lodging space was separated from other servants’ rooms in the second floor of the service wing. Servant’s room #1 had 2 closets (two individuals might have shared this room). The windows faced the neighboring house and did not have a good view. Servant’s room #2 had two closets. Servant’s room #3 had good light and faced the street. It was closer to the bathroom. Compared to the other rooms, this bathroom was more decorated. Painted walls, brass windows, glazed tiles surrounded the bath, although the design of the door was relatively plain. Judging by its location and orientation we may infer that a servant of a higher status might have occupied the third room.